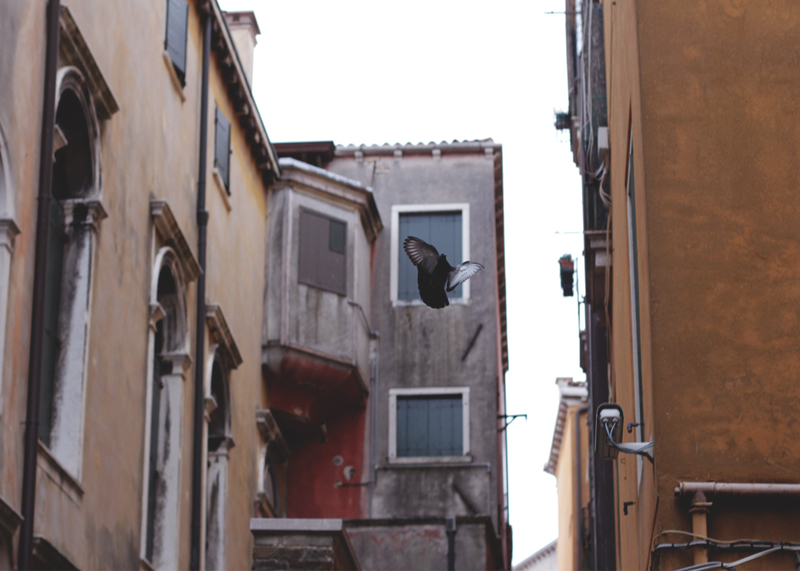 Even stepping off the plane at Venezia airport, I had the distinct feeling I was about to enter somewhere pretty magical. Italy, and particularly Venice, has been top of my Wanderlust list for some time and clearly my constant out loud dreaming and pining for the place wasn’t exactly subtle as it just happened to be the destination GB chose for my 30th birthday surprise, which of course warranted many squeals from me when I cracked the secret code on that day in March.

As the date of our long weekend adventure rolled around I’ll admit that there was a tiny part of me that worried Venice might not live up to the picture perfect dream my wanderlusting mind had it portrayed as. I’d heard talk of the bid for tourism starting to take over the purity of the city, of people being disappointed on arrival that the small island didn’t look quite as pretty in real life as it did in the postcards, of overpriced food and touts spoiling the essence of the streets. There’s a certain safety that comes with letting a place live only in your dreams, never allowing real life (grey skies, busy streets and tourist tat) to cloud that vision.

But of course dreams have certain other draw backs; namely the inability to touch, feel, experience. And even if it does destroy the pretty mystique of your dreams, experiencing a place with your own eyes, taking in the real life version, warts and all, is usually totally worth it. As those tangible memories last so much longer than the hazy image of any dream. Even if it does rain. A lot. 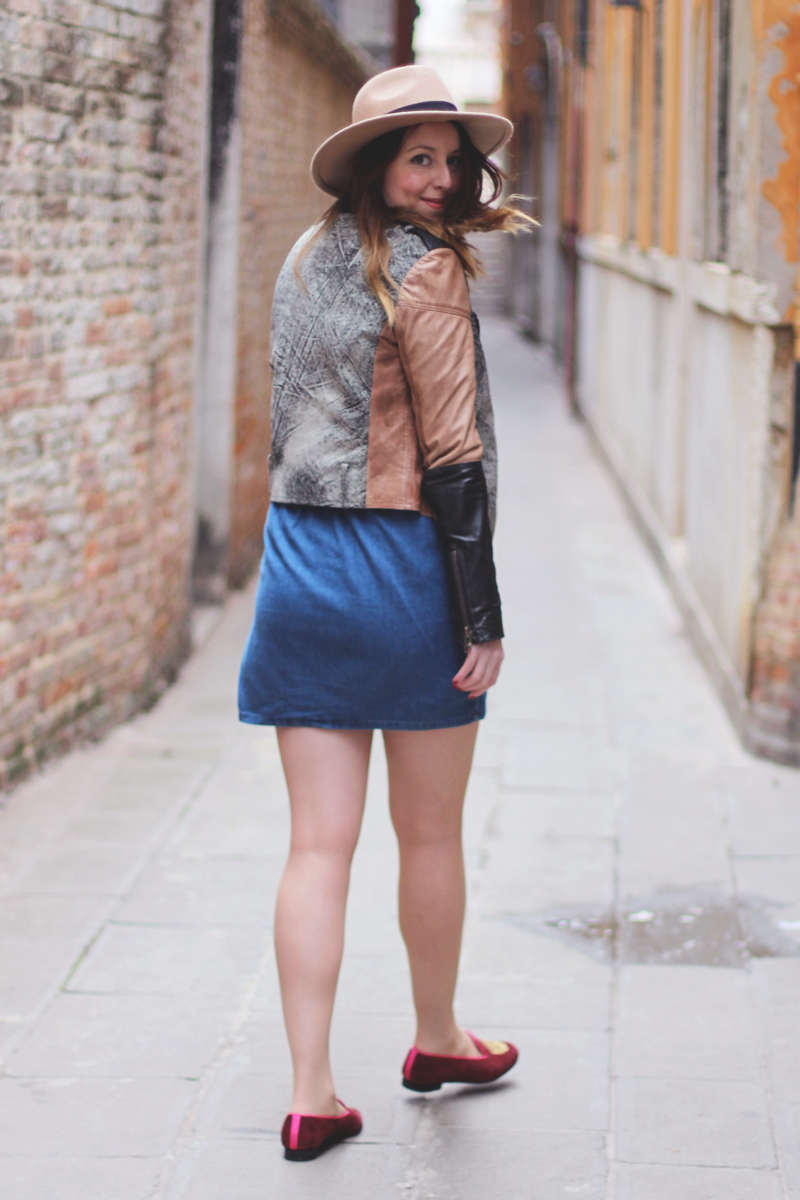 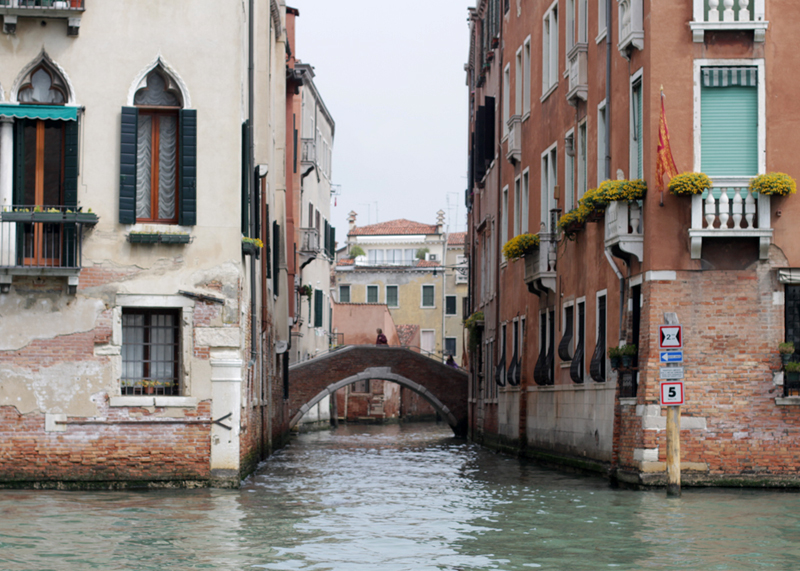 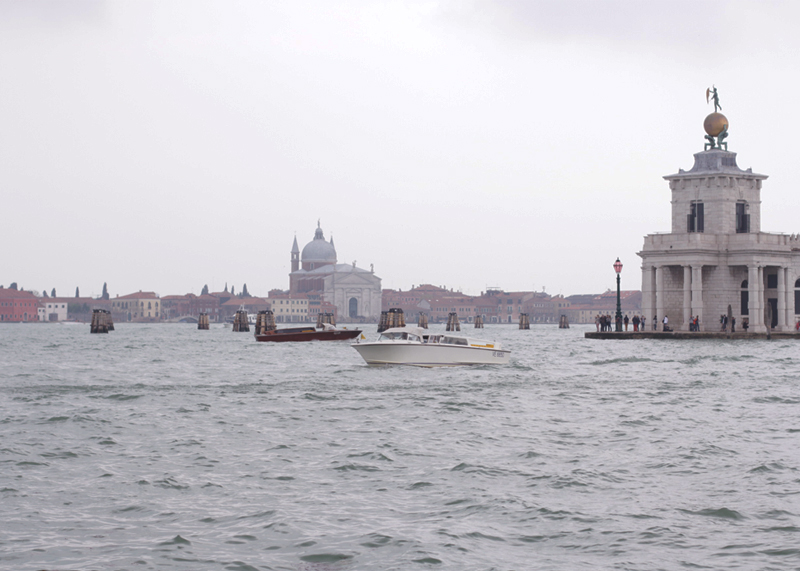 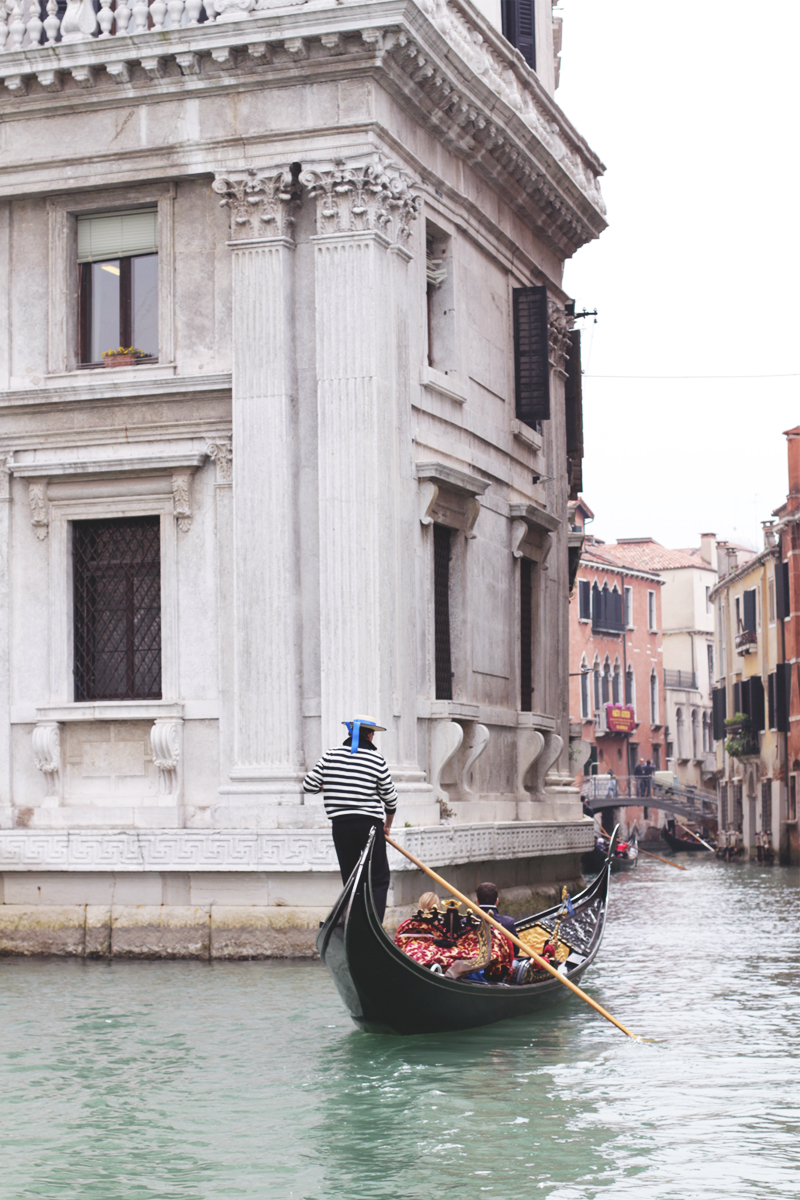 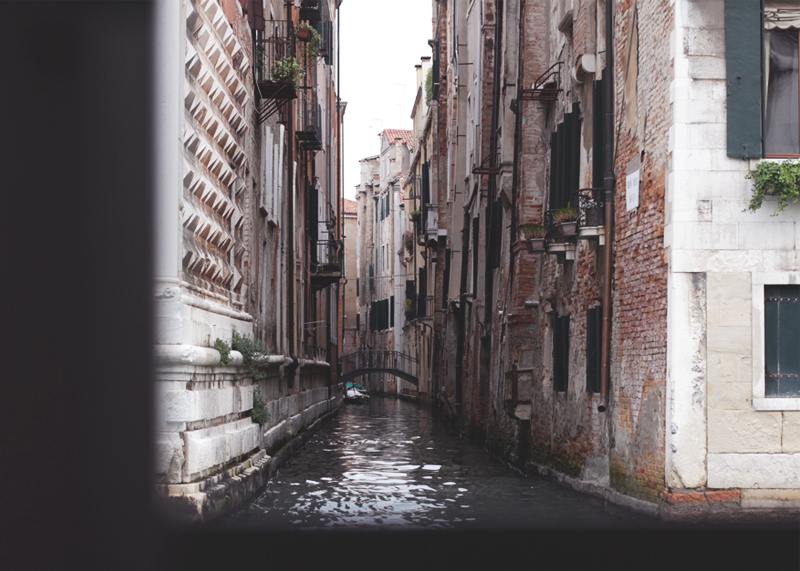 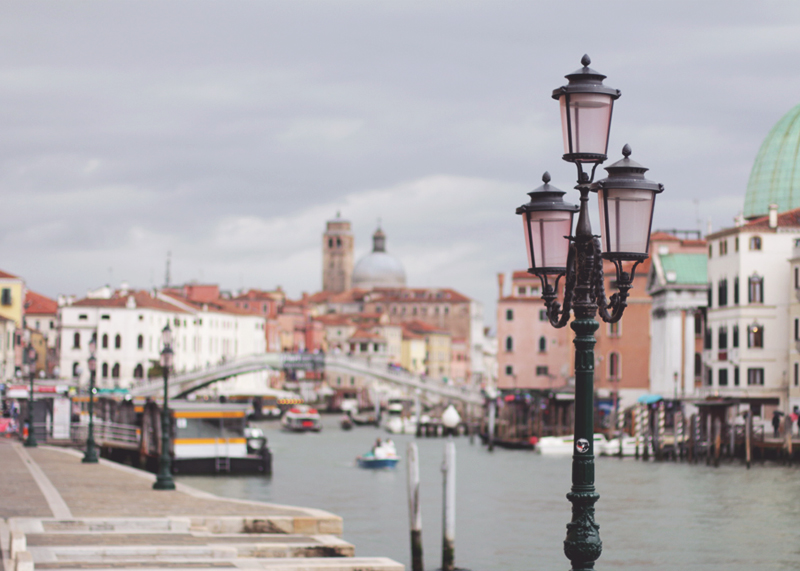 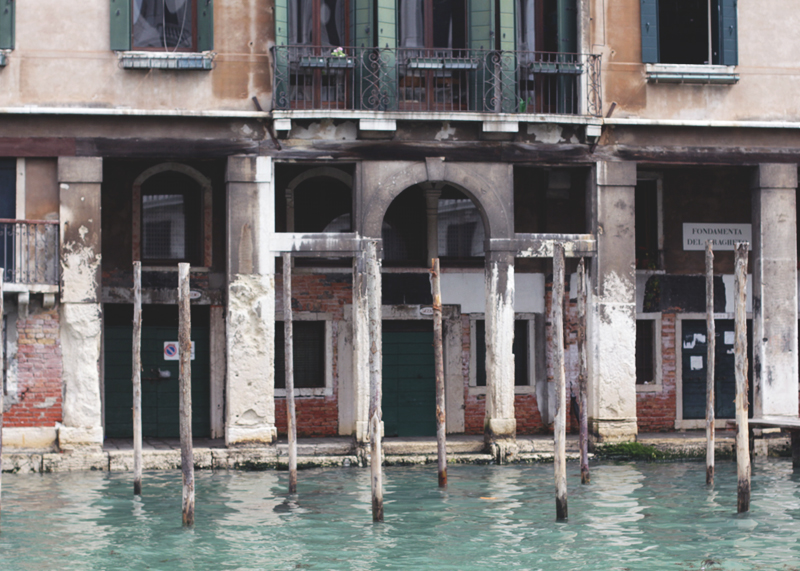 I needn’t have worried too much about Venice though, arriving for our first evening in the city’s main strip after checking in to our cute little AirBnb apartment, the beauty of the place was immediately evident (even if the weather wanted to convince us otherwise). I’ve since described it to people as a Disney town as being there really did make me feel like I wasn’t just in a different country but on a different plane of being. It might have something to do with the fact that there are no cars on the island (the day we spent in Florence had me completely disorientated, when suddenly vehicles were back on the streets we walked on), a whole city surrounded by water, the only way to get around by foot or boat has a distinctly fantasy-land feel to it don’t you think? 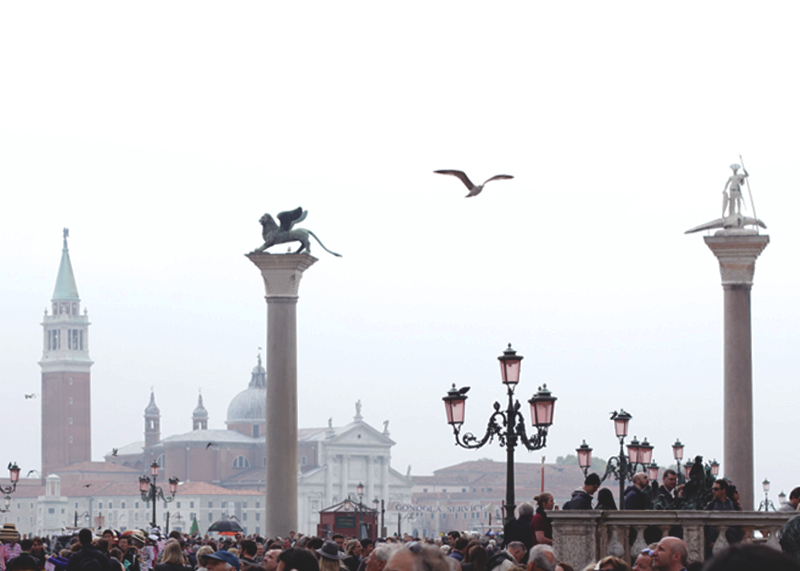 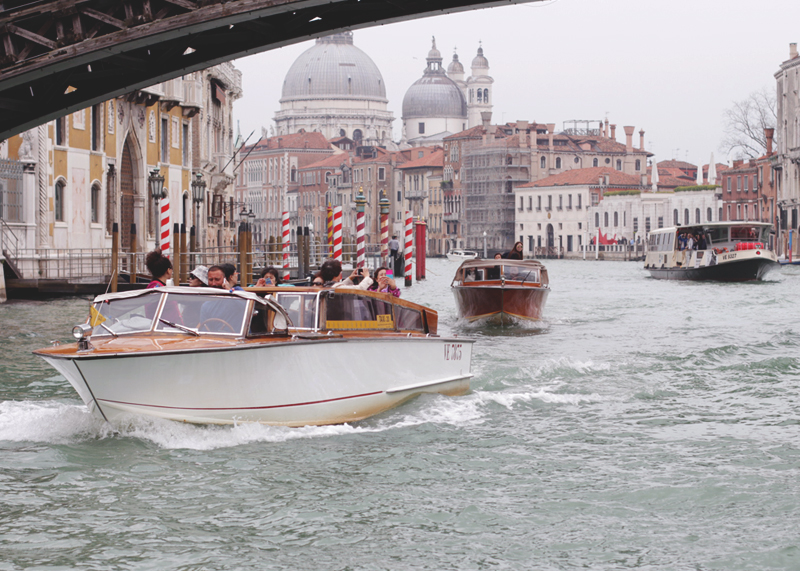 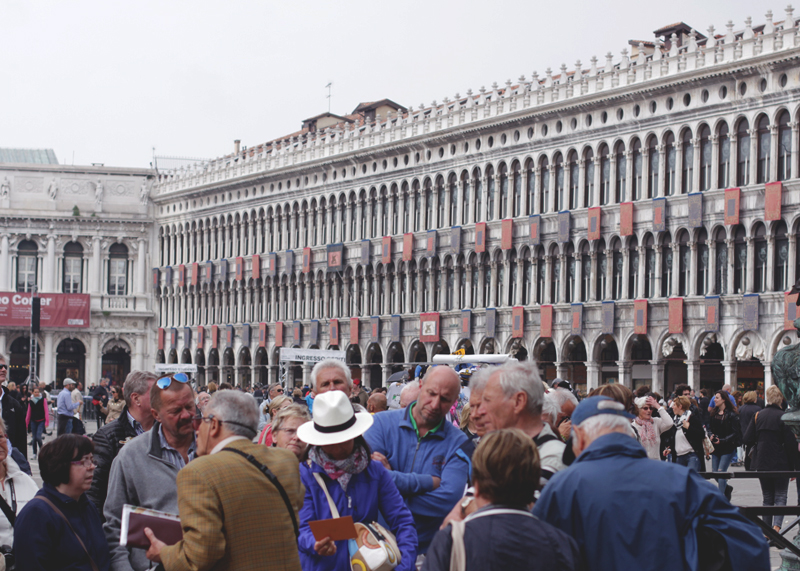 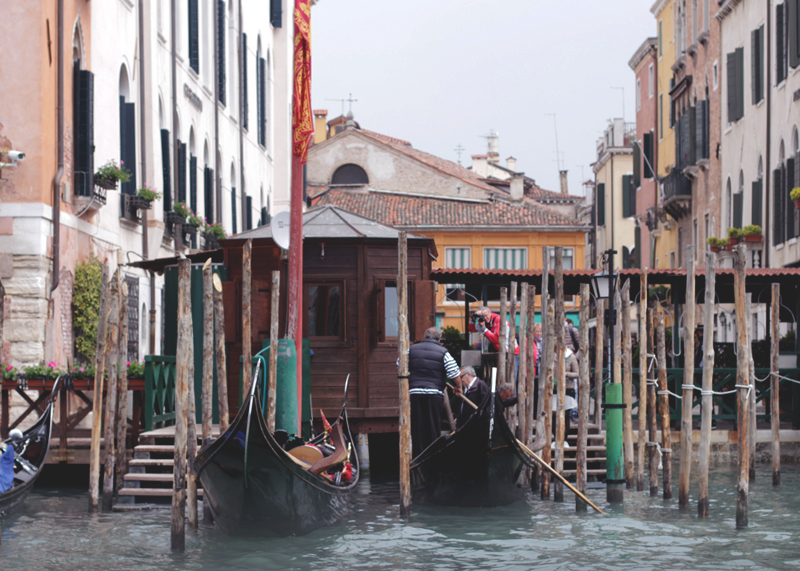 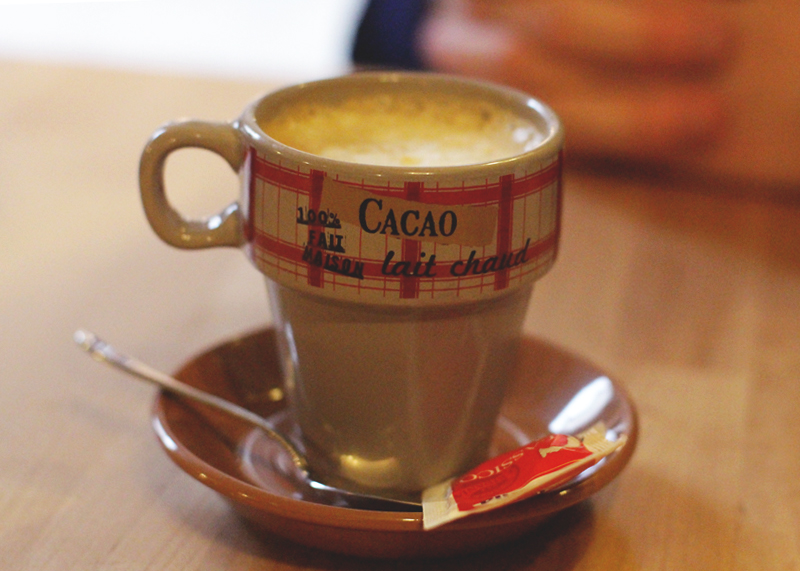 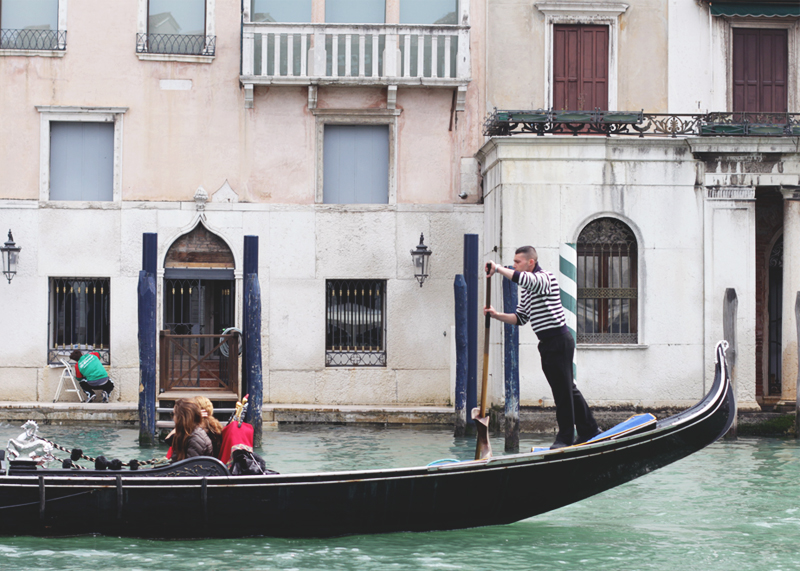 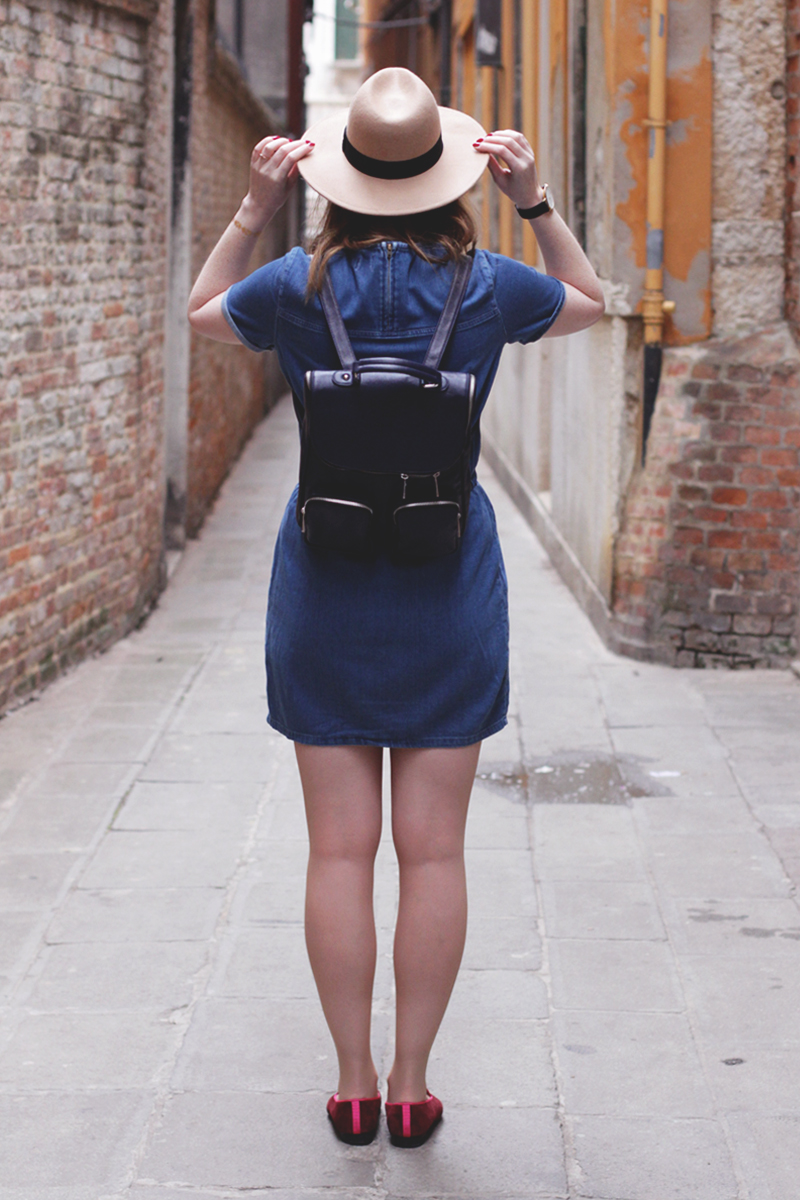 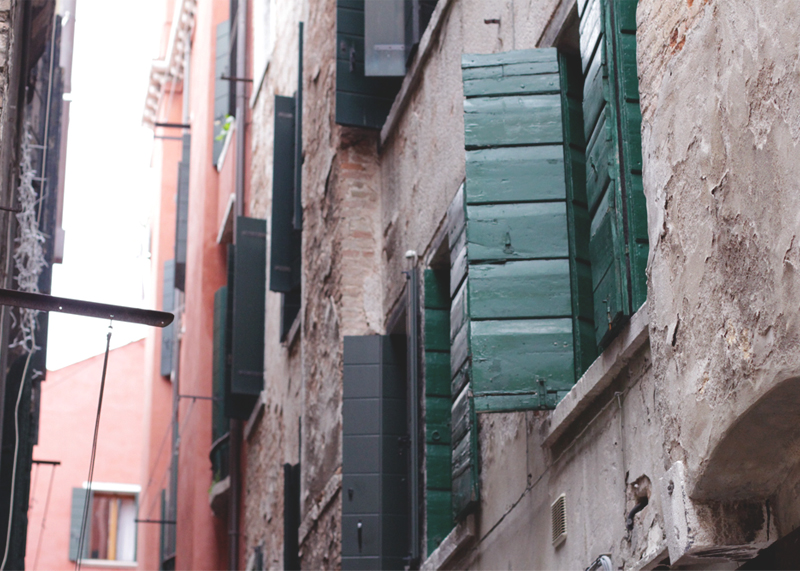 It’s true that tourism rules the city somewhat now, and there were certain areas (St Marks Square primarily) which felt a little crowded. Although there’s some that might say seeing people stand in the middle of a square to let birds flock to them wouldn’t be a miss on a Disney movie either, and the area itself is beautiful so I wouldn’t advise missing it out. As we visited in April, I realise that the streets undoubtadly weren’t as busy as they may be come the Summer rush, but we didn’t find it difficult at all to block out the tourist scene, avoid the busy restaurants and let the throngs of people queuing for gondola rides wash over us. Instead we sought to find our own way amongst the little back streets, stumble into the quaint local bars who offered free pasta during happy hour and gave us shots of Grappa on the house to ward of the rain, and attempt to admire and soak up the true Venetian culture. 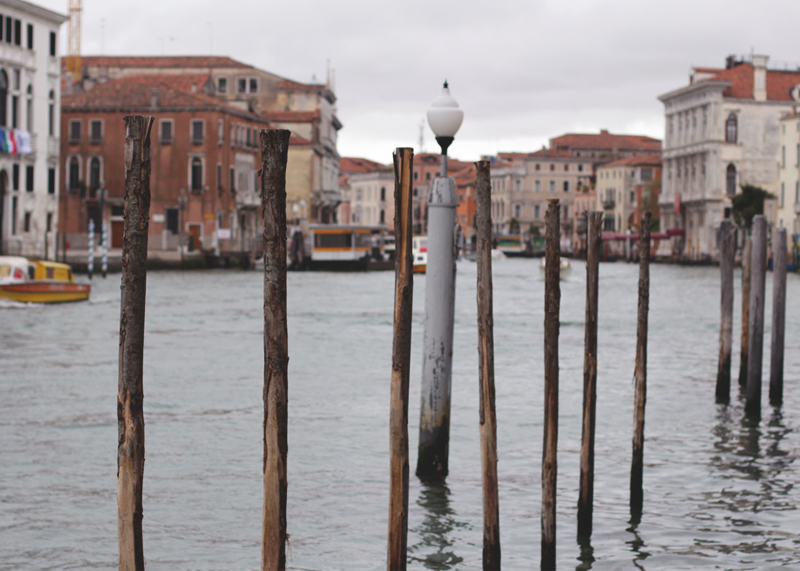 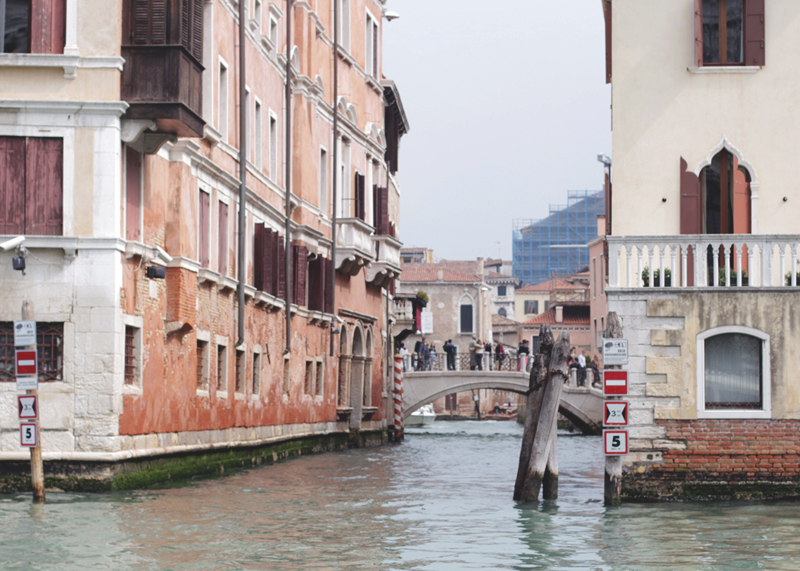 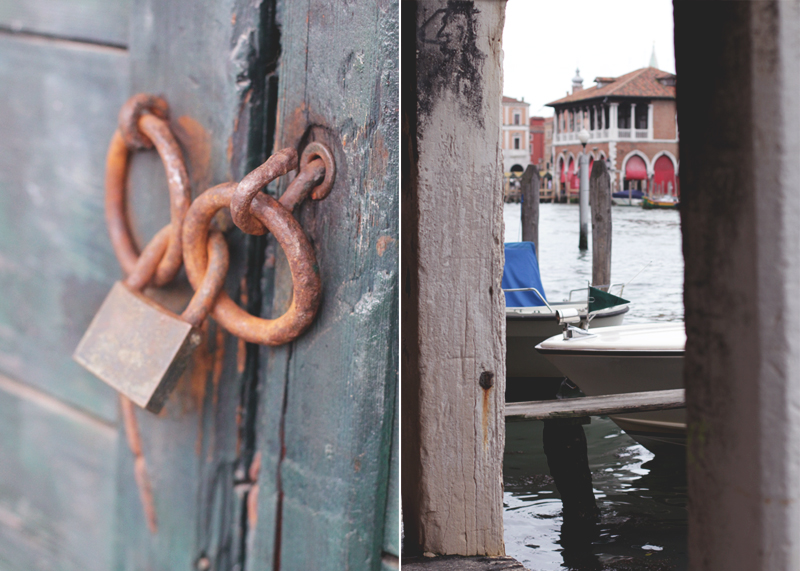 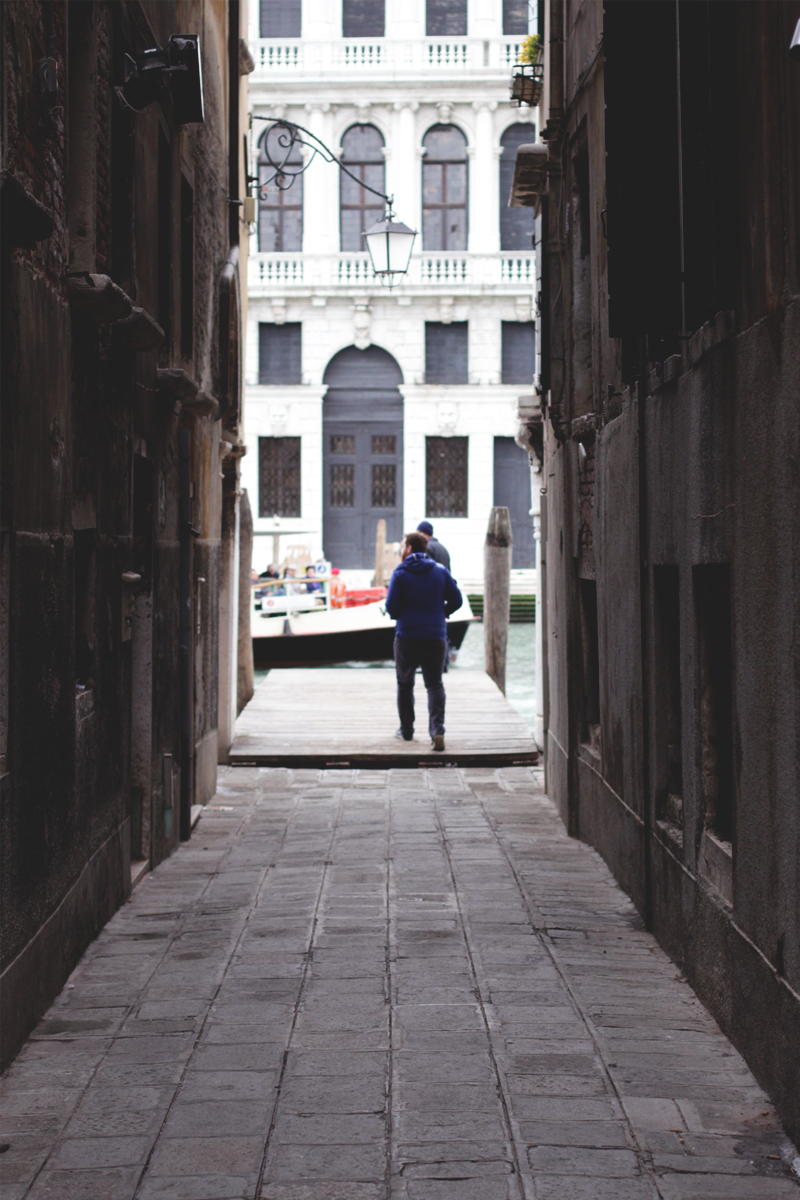 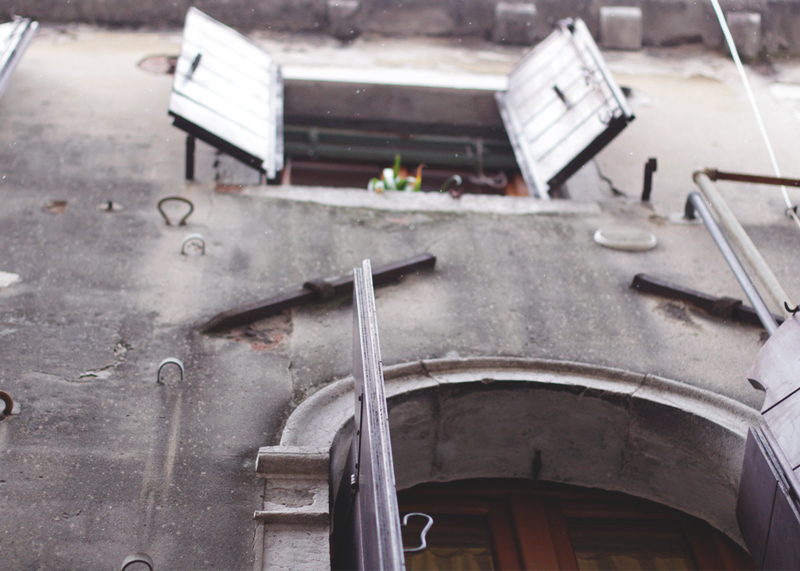 We were fairly unlucky with the weather those first two days, although I’ve since learned that this is typically what Venice is like – rain one day, a heatwave the next – and in hindsight being somewhere where the waters edge is visible at every corner during a torrential rain storm, and witnessing those dramatic skies clashing with the line of the sea, is a memory I won’t forget in a long while. Even in the rain I was mesmerised by the quaint streets and beautiful old architecture so you can imagine how snap happy I got when on our final day in the city we were blessed with high temperatures and clear blue skies, making those already beautiful streets turn into colourful and awe inducing scenes that were better than any postcard (and as a result have made the editing of this first travel post extremely difficult). 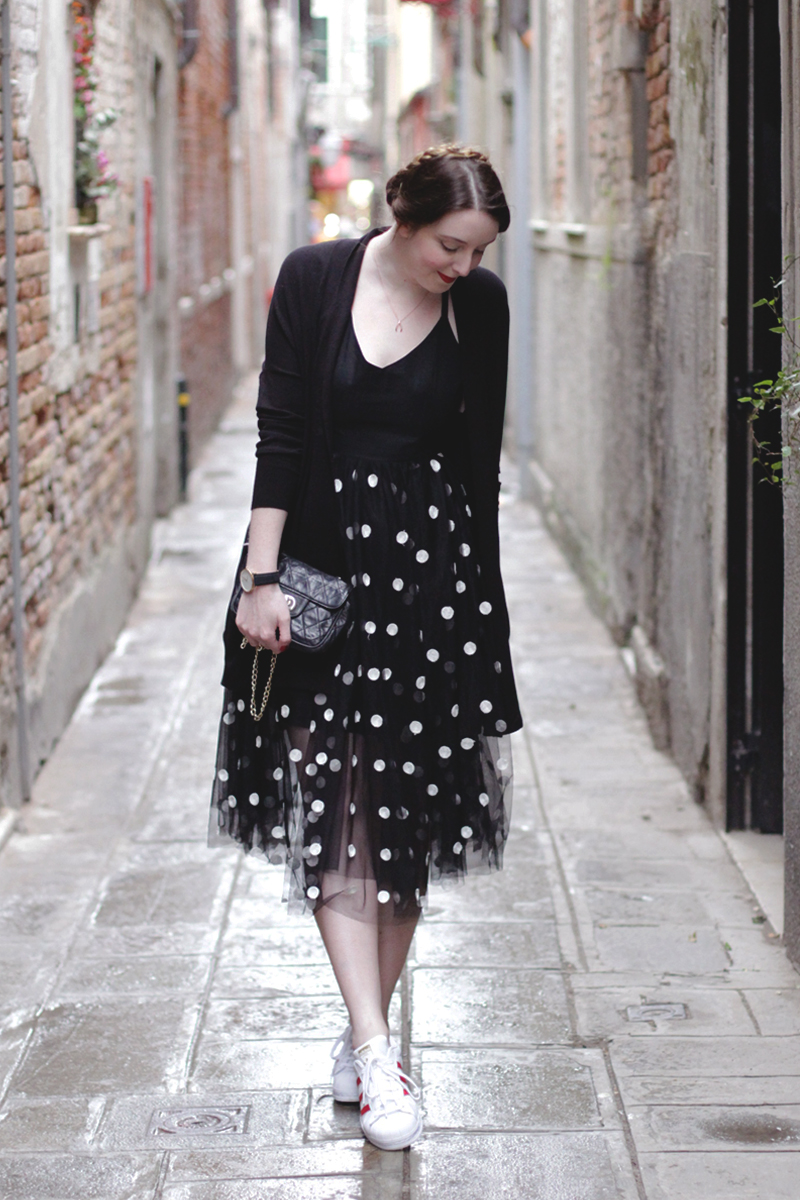 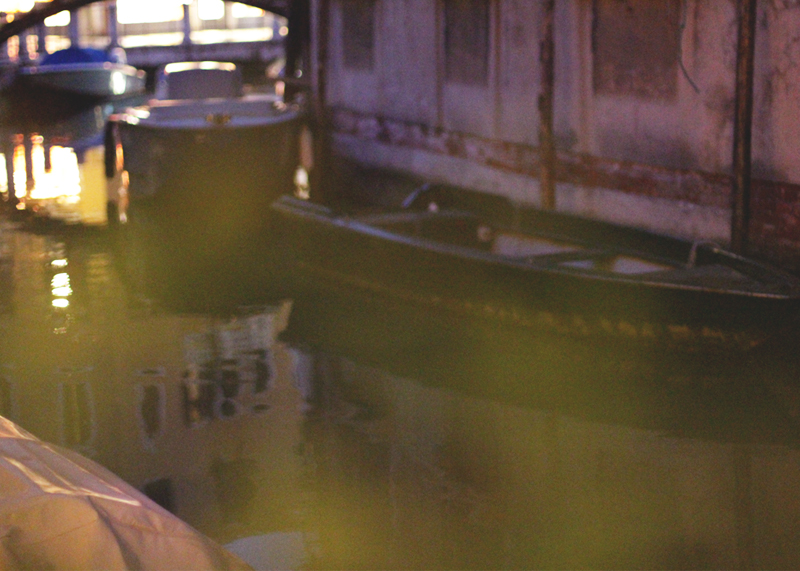 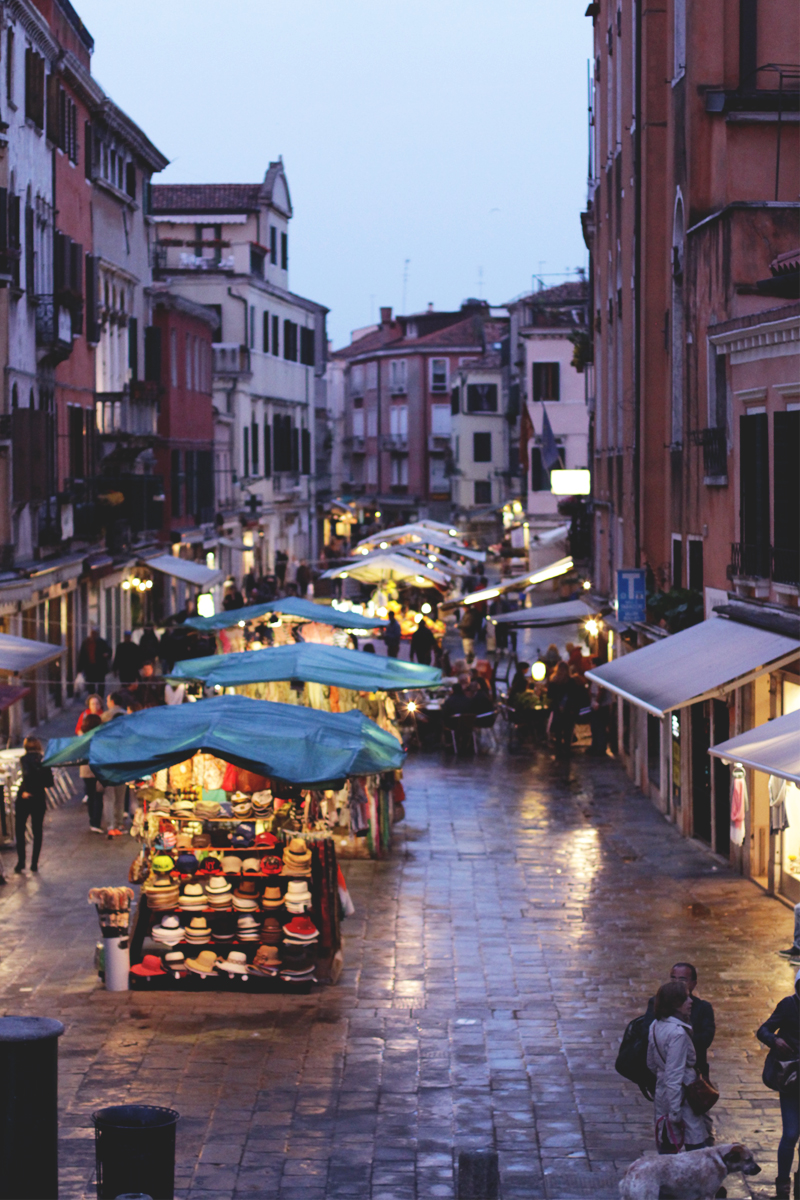 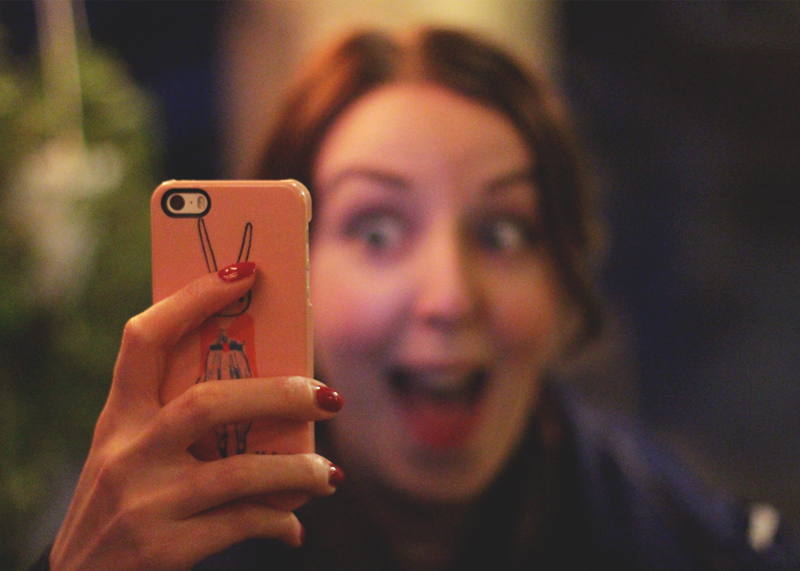 In the end I concluded that there was such a stark contrast between my photos from the first couple of days and my photos from the last that to group them together seemed wrong. Both sets of scenes allude to a beautiful and atmospheric Venice, yet in such uniquely different ways, each version captivating in its own right. So today I’ve taken you to a mystical and slightly moody Venice, full of dramatic skies and foggy views. Proof that even in torrential rain, this city still has oodles of postcard worthy appeal.

Hope you’re all having a lovely Sunday, my first Venice outfit post is coming tomorrow and stay tuned for part 2 of my postcards – a bright and colourful version of this amazing location – later in the week!

Venice is a beautiful city! Turism in Italy is a big resource but sometimes is so oppressive! I live in Rome so you can imagine here the situation is more and more caotic than Venice! Italy is a very amazing country, come to visit Rome!

You are so right Giulia, it’s hard to avoid nowadays in most of Europe but in the same way as London, there are still plenty of areas to discover free from tourist traps. I’d love to visit Rome next x

Beautiful photos! I’d love to go to Venice someday, despite it being very touristy. Sounds like you managed to see Venice from a more genuine side though. I’m sure it helps if you avoid summertime. Sounds like you had a wonderful time, despite the rain!

You should definitely go Mimmi, it was beautiful! I wouldn’t let the tourist element put you off, so many places in Europe are like this now but there is always amazing spots to be discovered! x

Venice is an experience rather than a location – worth seeing at least once in your life. You are right – it’s like being somewhere out of time and place. Brilliant photos and blog!

You are right, an experience worth doing. If I went back again, I’d miss out some of the more tourist led spots and seek to find more of those little hidden gems x

Venice looks absolutely stunning, even in the rain! Your pictures make it look absolutely magical. Its right up there on my list too 🙂 Can’t wait to see your next post!

Thanks Jennie, it really was a magical place! Definitely visit if you can xx

How ace is this, sure been one of my favourite posts from you yet. It looks so good, and my gf is always banging on about going but I’ve never been mad on the idea. But now, yes!

Oh thanks Mat, too kind! You should definitely listen to Hollie, it’s an amazing place!

[…] Our trip to Venice actually couldn’t have come at a better time. The effects of a busy few months juggling work, blog (me), drone exams (GB), travelling, and wedding planning had begun to take their toll on us and we were pretty wiped out. […]

[…] certainly does feel like a lifetime ago that we downed tools for the long weekend and headed off to Italy for a few days of magic and adventure. In reality of course it was only a couple of months ago, but […]