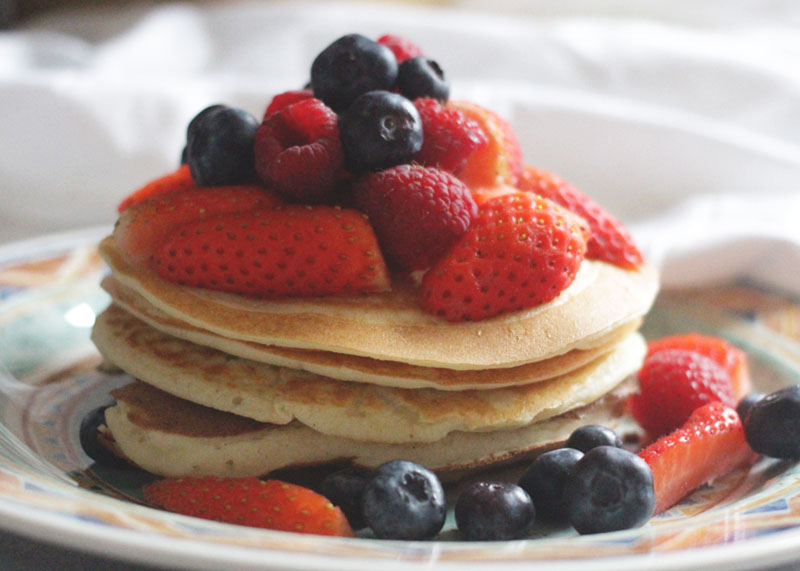 Well hello Monday (again), hope you’ve all had a lovely weekend? Mine has been filled with fun and excitement and been exhausting in the best possible way. My mum and GB’s mum were both visiting and we set off early on Saturday morning to tackle project wedding dress which was an absolute hoot! I’m not sure I quite found ‘the one’ but it gave me plenty of food for thought and we had so much champagne fueled fun.

And so another week begins, and quite an exciting one too as tomorrow is Pancake Day!! I love pancakes on any given Tuesday but certainly wouldn’t miss out on the opportunity to whip some up on a Tuesday dedicated to their cause.

I’m slightly bias in that my favourite type are the Scotch pancakes – small, thick and totally scrumptious – mainly because being smaller I can justify eating more of them. But not one to discount any form of pancake making, today I thought I’d share my take on the four most classic pancake personalities and how I like to enjoy them. I’ve kept the recipes below simple, however seeing as I’m on a gluten and lactose free diet at the moment, I made mine with gluten free flour and lactose free milk which was much more of a success than I’d anticipated and I honestly couldn’t tell the difference when scoffing. If you too need to cut this out, or simply want something a little less heavy I can confirm that it does work (you just need a little extra milk than with the normal ones as the mixture can come out a bit stodgier).

So, depending on your pancake preference, give one (or all four) of these recipes a go tomorrow and indulge freely! 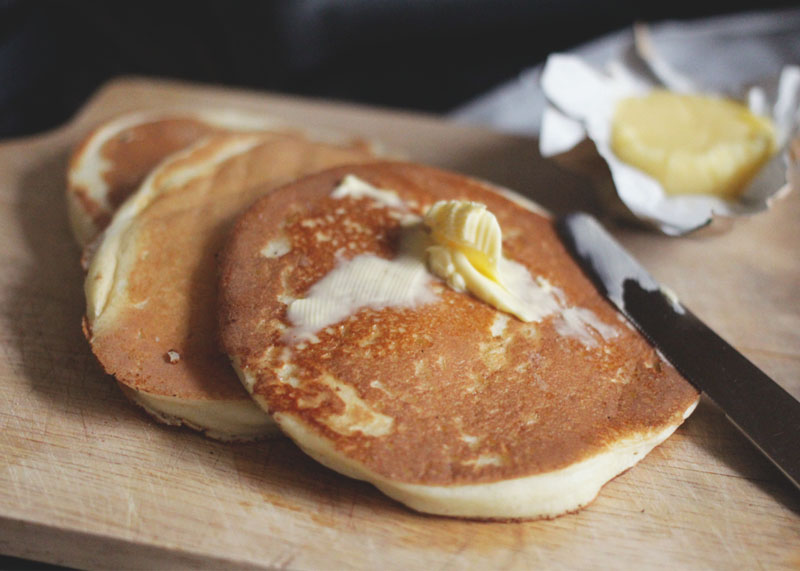 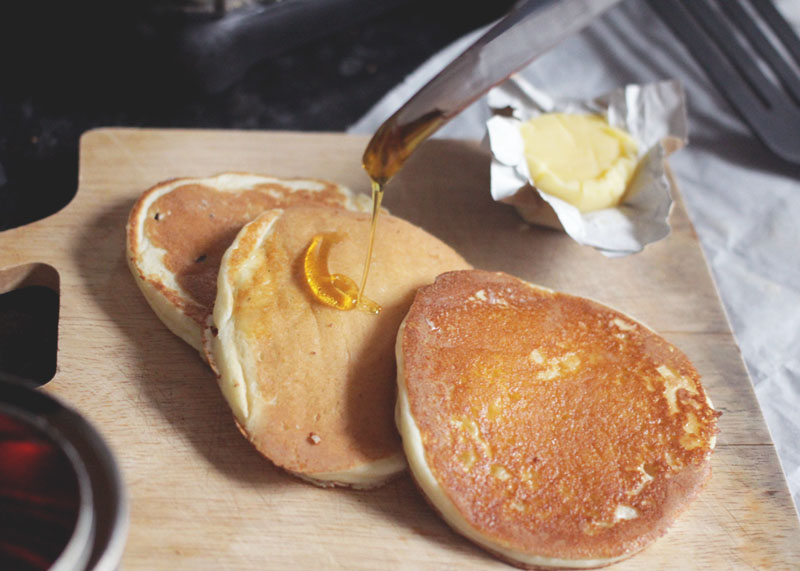 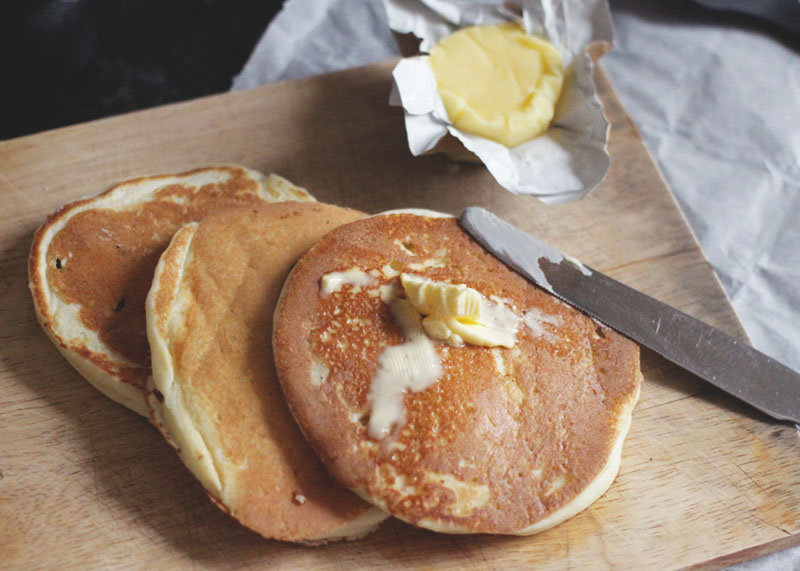 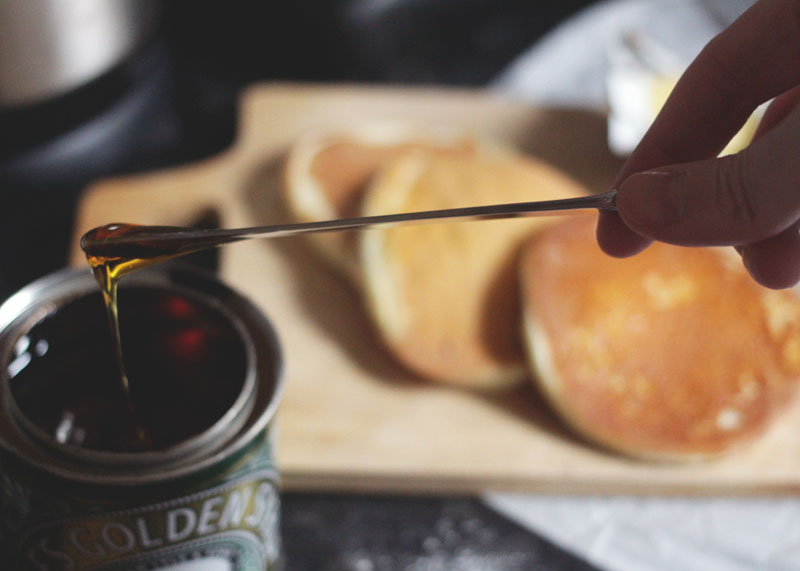 Serve – with a little butter, jam or golden syrup

My personal favourite for a small snack rather than as a full breakfast or brunch is the humble scotch pancake. In some ways more like a scone or dumpling, these are made with a heavier mix so as to give that short, fat, thick and spongy effect. You can thrown a few into the pan at the same time and don’t be afraid to let them rise quite high and get  good golden brown burn. As it’s more of a snack they can be eaten hot or cold, and are best enjoyed kept simple with a small spread of butter or jam, or if you want something sweeter a little dollop of classic golden syrup.

Ingredients (for around 6 small pancakes)…

a splash of milk

Sieve the flour into a bowl and add the sugar, crack in your egg and pour on the milk then beat or whisk into a lumpy mixture (add more milk if required until you have a thick but gloopy mix). Heat a small frying pan with a tiny amount of oil and ladle in dollops of mixture into small rounds. When bubbles start to appear on one side of the batter, it’s time to toss then let the underside go golden brown before removing from the pan. Serve hot or cold. 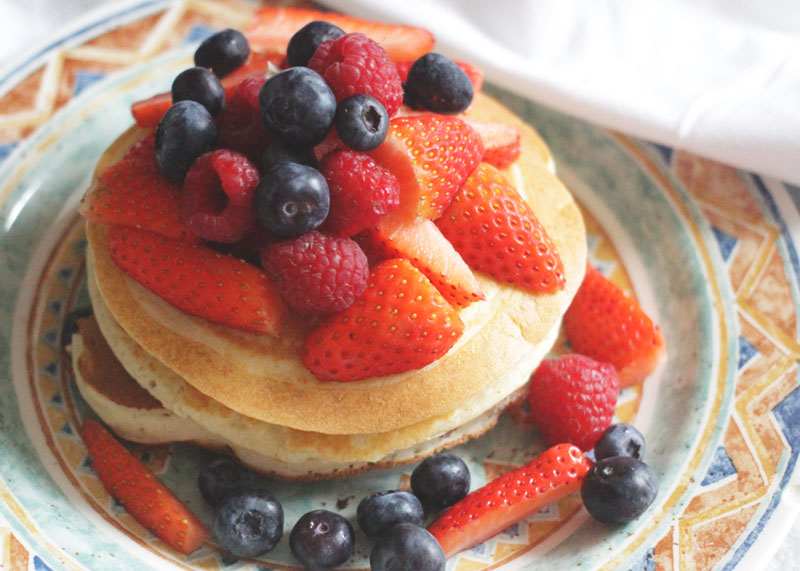 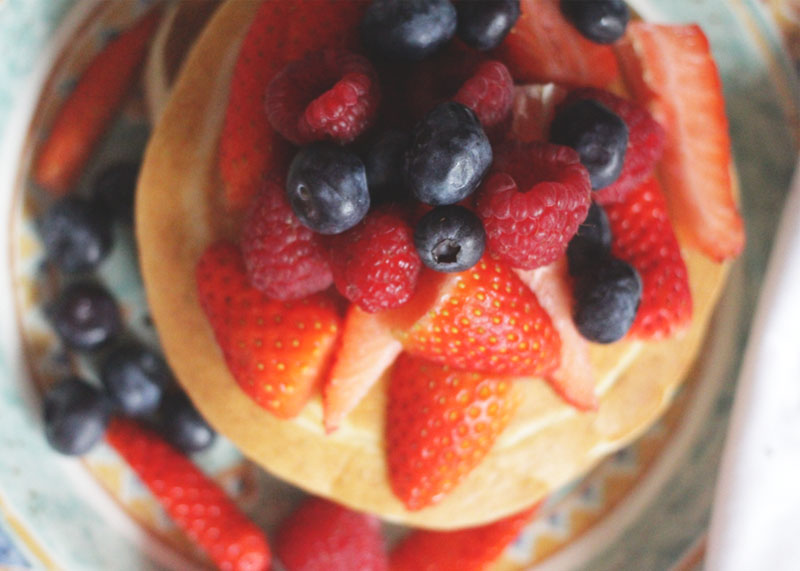 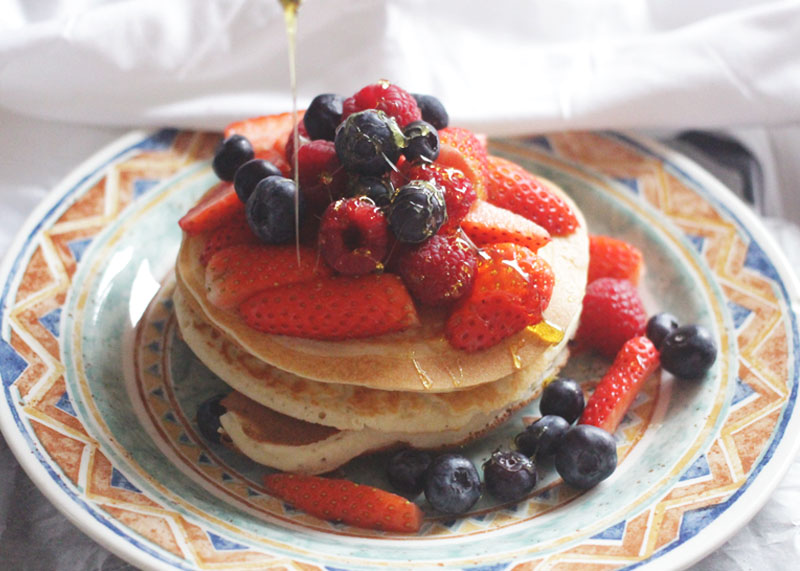 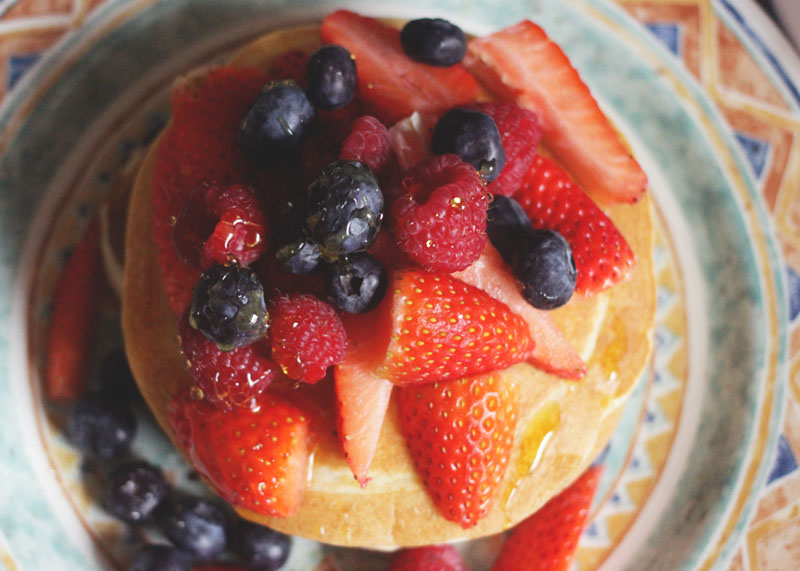 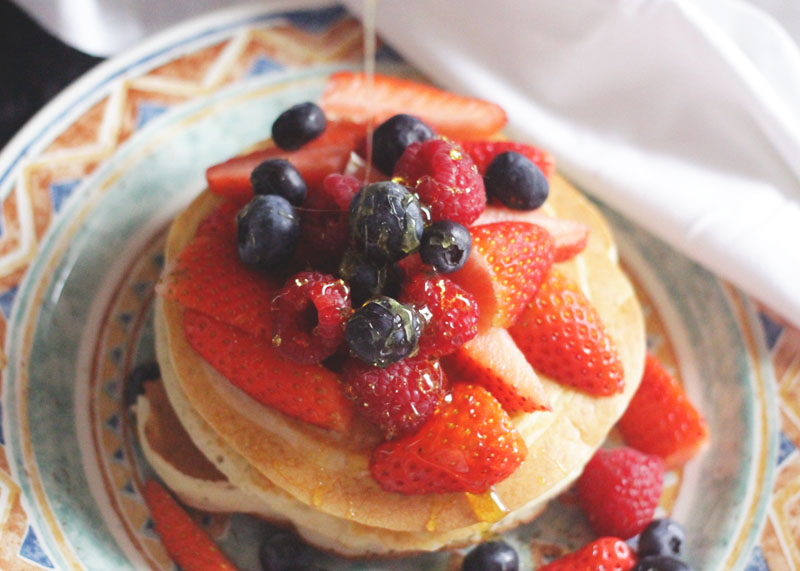 Serve – piled high on top of each other with fruit and maple syrup poured liberally.  (add bacon if desired)

Recreate an American diner at home by whipping up a plate of these for breakfast tomorrow and you definitely won’t regret it. Depending on how thick or large you make them you can stack them less or more but generally around 3-4 is plenty for me when topped with berries and smothered in maple syrup. For a truly traditional take try some crispy bacon, or for an alternative baked apples and cinnamon is lovely.

Ingredients (for around 8 large pancakes)…

Sieve the flour into a bowl with the sugar and baking powder, crack in the eggs and add the milk bit by bit, whisking or beating as you go until you have a smooth mix that is neither too thick or too runny. You should be able to ladle it easily into the pan and circle the pan around until it swims out to the edges and forms a good large round. Again when bubbles start to appear, flip and repeat until you have enough to stack up. Chop up your choice of fruit – I used raspberries, strawberries and blueberries and drizzle with maple syrup until covered. Cut in to the stack rather than eating one at a time. 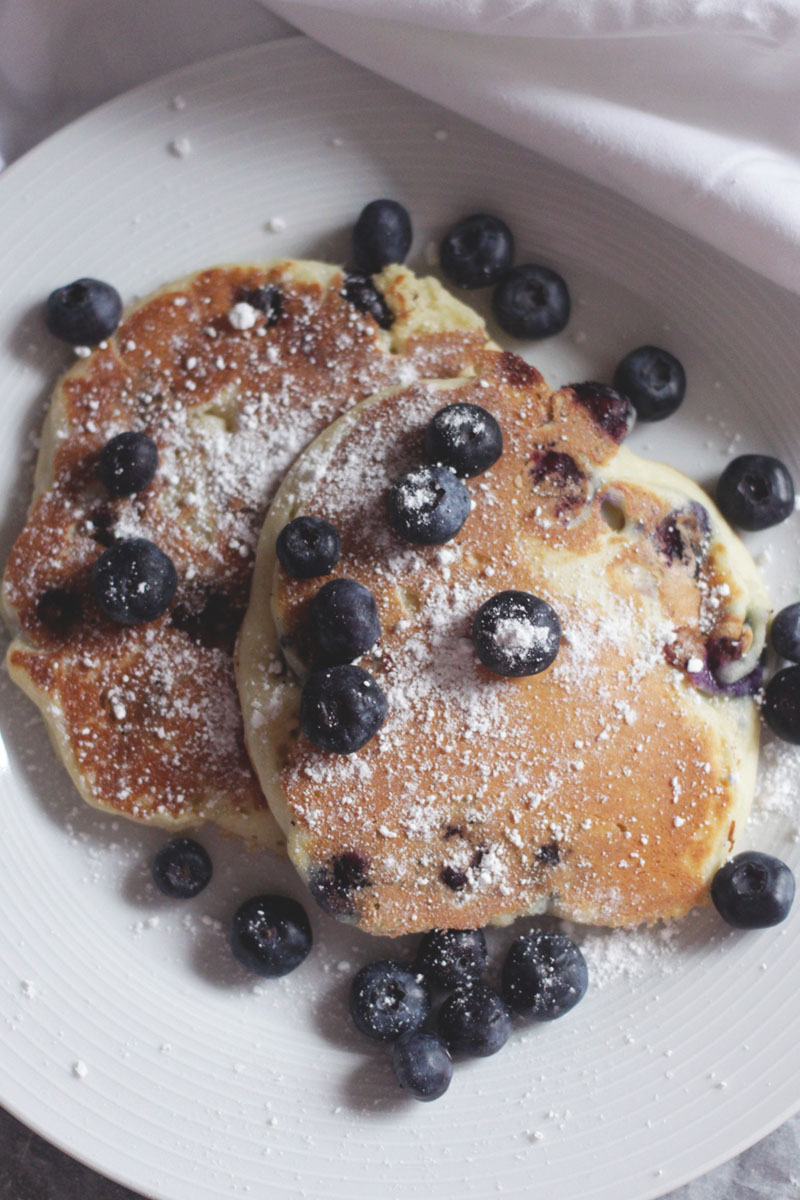 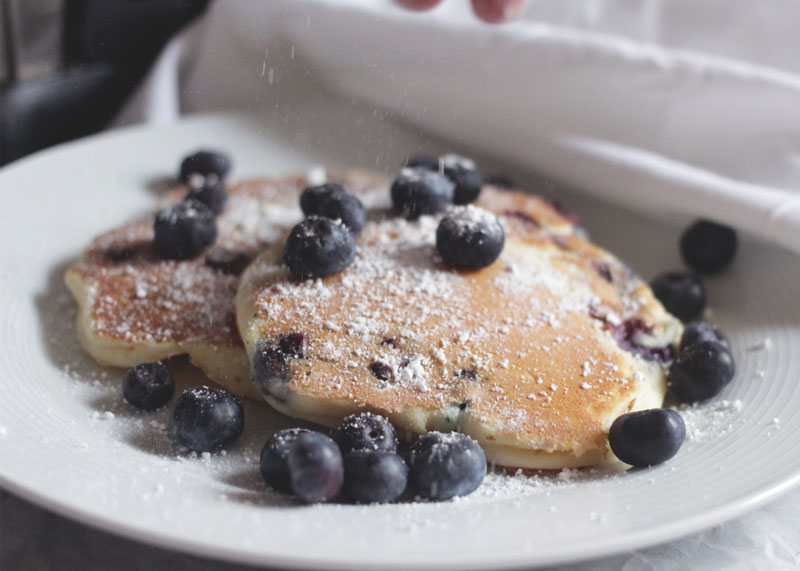 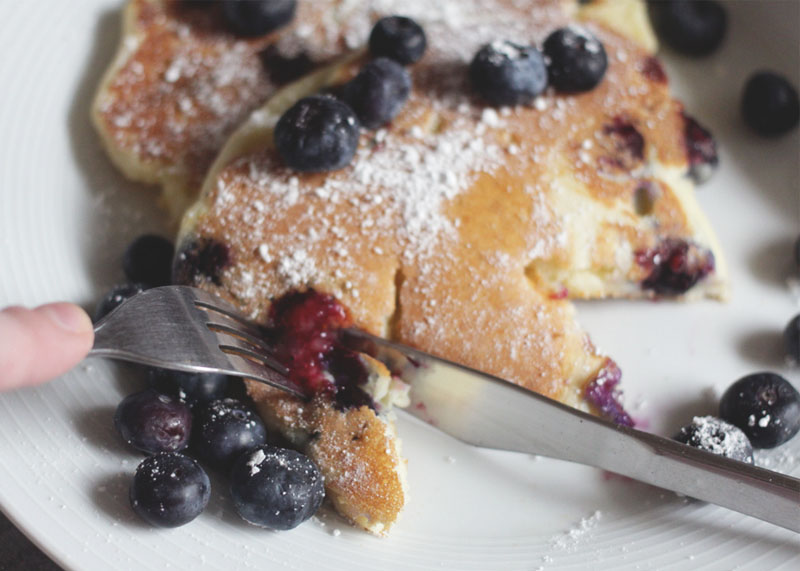 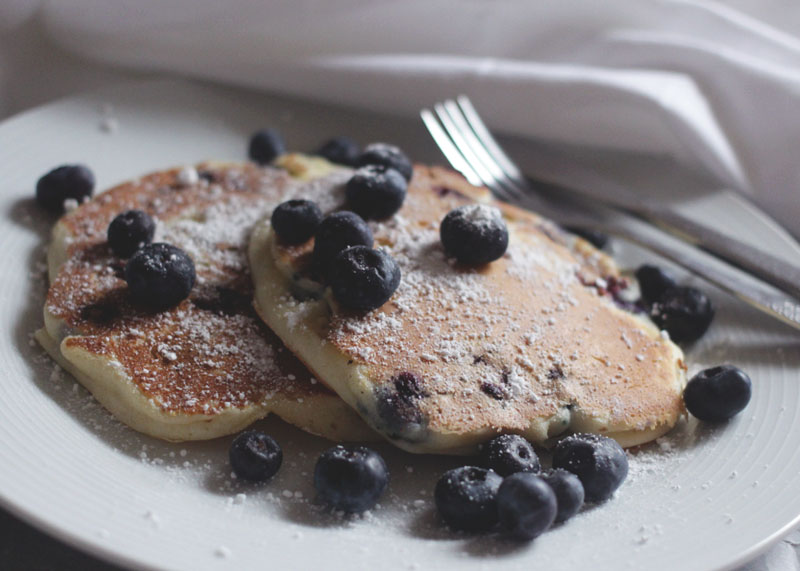 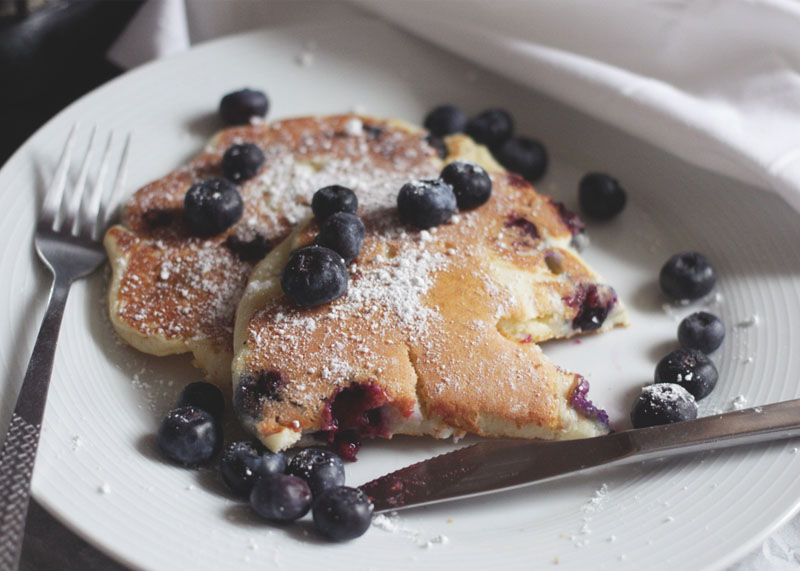 I got the idea to make these after trying some at No.11 Pimlico Road and I’m so glad I did as they were utterly delish. At first I thought I’d need cream or maple syrup on top but the blueberries inside the sweet pancake mix really is enough on it’s own.

Same as above but with a little less milk for a thicker pancake and a packet of blueberries.

I used the same recipe as I use for the american pancakes as it’s not overly sweet but makes a good thick cake. I’d advise using a little less milk however – start with a few splashes and keep going until you have a thick but workable batter – and then toss in enough blueberries to pepper the batter. You don’t want too many as the pancake won’t cook and the juice will ooze everywhere but you need enough to add to the taste. I used around half a packet in the mix and then the rest on top when serving. 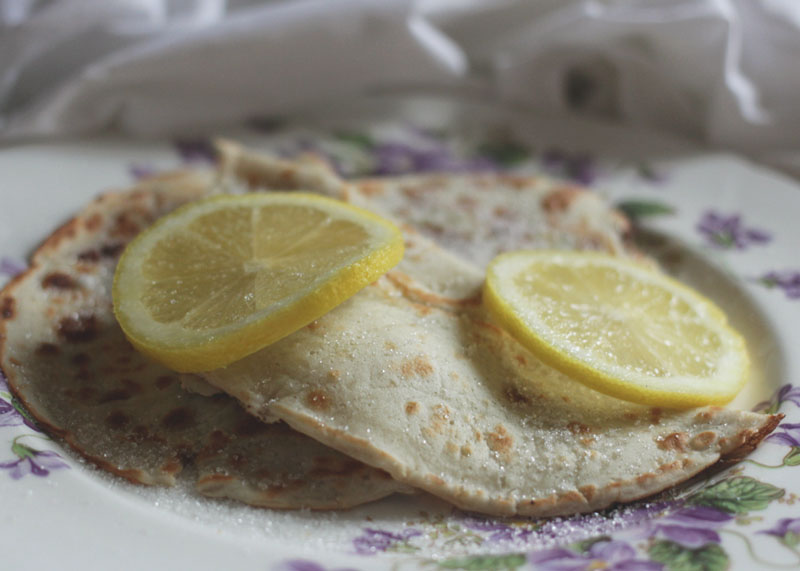 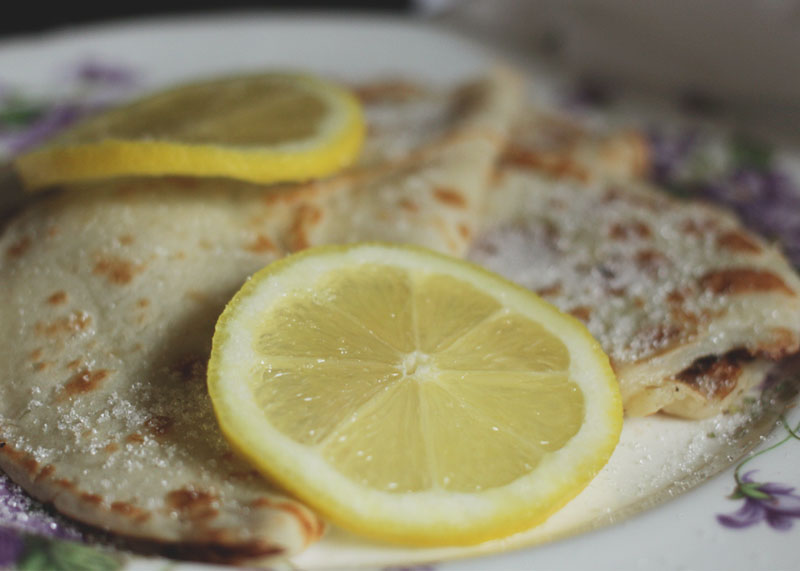 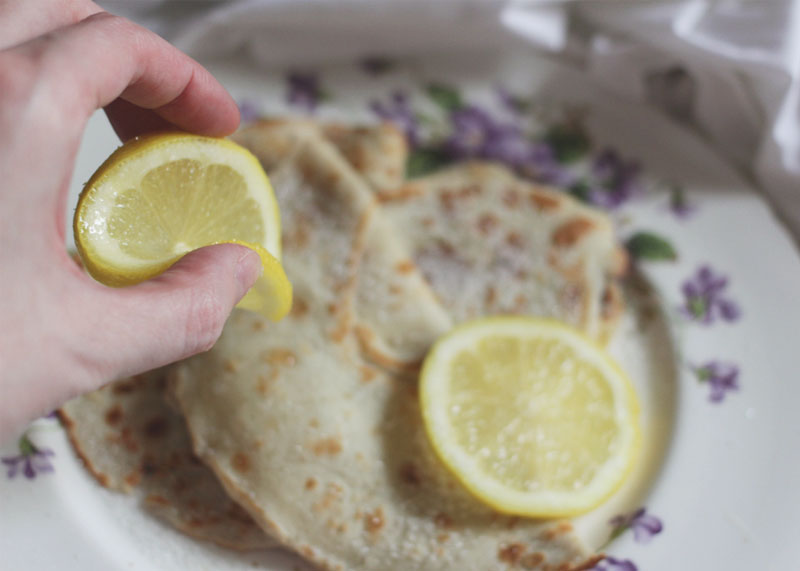 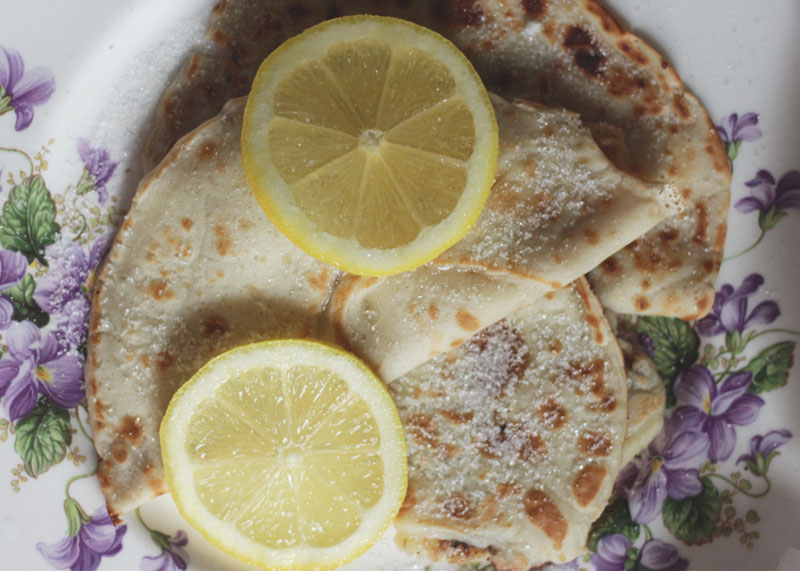 I do have to admit that the crepe is probably my least favourite pancake type, as to me it is a completely different sweet treat. I’ve enjoyed it immensely when in France or Belgium and topped with chocolate sauce and ice cream, or kept simple with sugar and lemon, but when at home I hardly ever make them. It might be because they are not quite as easy to manage as their thicker counterparts and can be a tad fiddly in the pan when trying to flip, which I generally can’t be doing with. But, it seemed wrong to miss them out as I know so many people think of crepes first when they think of pancakes. I do think these are best enjoyed simply, and having a few rolled or folded up on top of each other makes a more substantial offering than one on it’s own but that’s just me.

Sieve the flour into a bowl with the sugar and salt. In a seperate bowl whisk together the eggs and milk and then gradually add the flour until you have a smooth and runny mixture. Add the melted butter. Heat a wide and good quality non stick pan with a tiny bit of oil. Pour in a few spoonfuls of the mix and let run around the edges of the pan, keeping it thin. Loosen the edges after a few minutes and try and flip the crepe. Brown on both sides then fold into two or roll up and serve hot. Squeeze some fresh lemon juice over and scatter a spoonful of sugar.

Wow well the prep for this blog post was just torture as you can imagine, I mean I of course had to eat all four pancake styles in one sitting – torture! I’d love to know which are your pancakes  of choice and whether you’ll be making them for brekkie tomorrow?

This is a really lovely post. I love how well you captured each style of pancakes and how they’re done. The Scotch pancakes remind me of the ones my friend’s granny used to make. I’ve gone for the more European approach and have perfected my crepes! You cans see my crepe recipe on my latest post if you want to 🙂
Hats off to eating all those pancakes haha!

Hey Holly! Oh I’m so impressed that you’ve mastered crepes, yours look fab, mine never turn out quite right so I’ll need to try your recipe! I love the Scotch pancakes too, and it’s probably because my mum used to make them when I was younger same as your granny, funny that isn’t it? x

I had no idea that tomorrow was Pancake Day! Thanks for the heads up 🙂 On Valentine’s Day, my campus dining hall served heart-shaped red velvet pancakes. They also had whipped cream, a bottle of fudge, and a bottle of cream cheese frosting. Can’t wait to see what they’ll have in store for us tomorrow 😀 -Audrey | Brunch at Audrey’s

How did you not know Audrey!! It’s one of my favourite days of the year… those red velvet pancakes sound amazing!! I must try that next time, your Uni campus sounds amazing haha xx

All of these pancakes look divine!

Thanks Kate, just feel a little guilty eating them all hehe!

I’ve only ever made the french crepe type pancakes before as it was the only recipe I could ever remember by heart. But I will definelty give the others a try!

I think it’s whatever you’re used to, my Mum always made the thick ones when I was younger so I found those easy but crepes are a bit beyond me! x

[…] time last year I wrote a blog post on my four favourite pancake recipes to try for Pancake Day, and it’s pretty likely that I’ll be cracking out one of those pancake variations […]